People in prisons and other closed settings 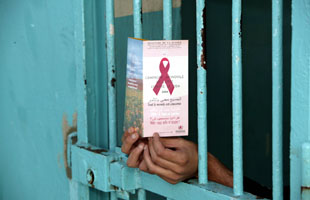 People in prisons and other closed settings The estimated global HIV prevalence in prisoners is 3%. In some settings, the HIV prevalence in prison is 15 times higher than in the general adult population. Recommended HIV prevention and treatment services are usually unavailable in prison settings: only about 5% of countries have needle/syringe programmes in prisons and only 1 in 3 provide prison based opioid substitution therapy. Condoms are available to prisoners in only 28 countries, although they are accessible through programmes in community settings worldwide. WHO, working with UNODC and other partners, supports the implementation of comprehensive HIV services for people who live in prisons or other closed settings, including harm reduction services for those who use drugs. On any day, up to 10 million people are in prison including those in pre-trial detention; almost half of these in the United States, Russia or China. Worldwide, in a year, 30 million people will spend time in prison and in all 5 continents, prison populations are growing. Drug users are over-represented in many prison populations due to criminalisation of drug use and drug possession. Further, some people start using drugs in prison, start using additional drugs or engage in riskier injecting practices while incarcerated. Syringe sharing among people who inject drugs in prisons is common, exacerbated by a lack of needle/syringe programming in prison settings worldwide. Other HIV risk factors include unsafe sex due to a lack of availability of condoms in prisons, sexual violence, other high risk sexual behaviours and tattooing and piercing. Female prisoners make up about 5-10% of the global prison population, are more likely to be drug users and female prisoner populations often have higher (double or more) HIV prevalence rates when compared to male prisoners. The number of incarcerated women is growing globally, increasing by an average of 16% in the last 6 years. Women in prison are vulnerable to gender-based sexual violence; they may engage in risky behaviours and practices such as unsafe tattooing, injecting drug use, and, are more susceptible to self-harm. photo credit: UNAIDS